Fall 2014 I began my journey as a student at Alverno College in Milwaukee,Wisconsin. Established in 1887 by the School Sisters of Saint Francis.  The School Sisters were a group of Nuns who dedicated their time to educating all women. The school today is a Catholic Women’s College of higher education.

In 2015 I became one of the first Doherty Scholars at Alverno College.

Alverno has woken my creative spirit and has inspired me to find my voice in my art.  I am grateful for the support and sisterhood in every classroom and throughout the professors.

Fall 2017 I will unveil an interactive shrine/altar dedicated to the founding Mothers of Alverno College & the School Sisters of St. Francis.  After more than a year of researching, interviewing, reading and learning about the founders of Alverno the project will be given to the college and hopefully installed for all to see for some time as well as a viewing at Alfons Gallery located at the School Sisters of St. Francis.

Below is my Alverno College experience documented by photos, scans, digital formats of all of my art projects. 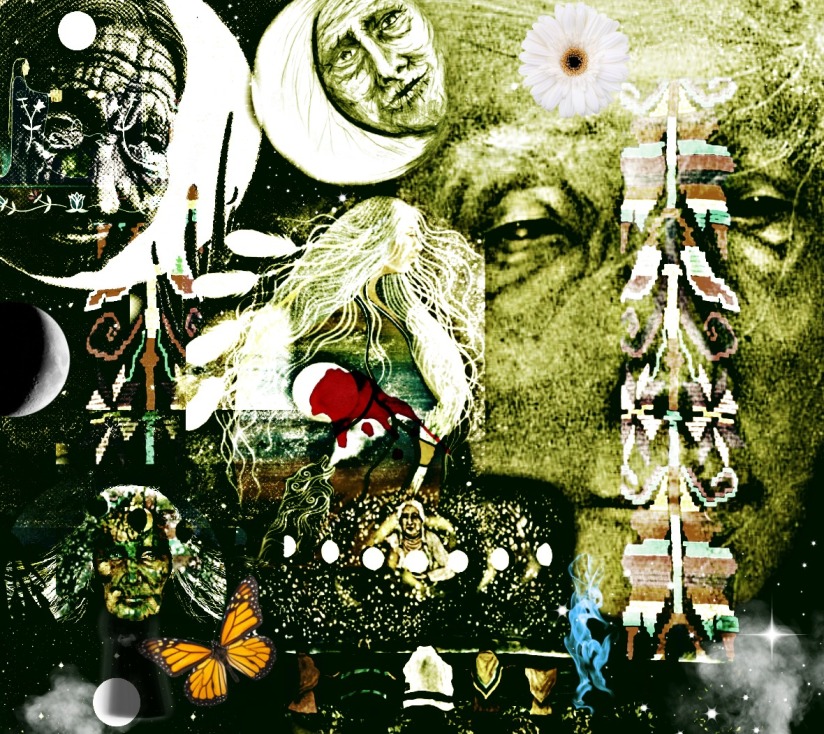 Educator, author, modern artist, feminist, are a few ways to describe Judy Chicago.  Chicago was an artist who dared to step outside of the box, the box female artists were constantly put in, especially in the 60s and 70s when Chicago was a young artist in an art world dominated by men, not too different than today in 2016.  Working as a studio artist and collaborating with artists throughout her career, Chicago changed art for women in the future.  She moved mountains by shedding light on women throughout history while working alongside modern day female artists.

In 1970, Chicago started the very first feminist art program in the US at Fresno State.  Later in 1972, she pursued the feminist art program with Miriam Shapiro, Canadian born artist and friend of Chicago’s, and grew it in the California Institute of Arts.  Together Shapiro and Chicago named it Woman House.  Woman House defined feminist art of their time while encouraging women’s creativity with exhibitions and performing art being showcased in the Woman House (Levin. 2007).

Chicago would repeatedly, throughout her career, point out the fact that women are not supported as much as they should be in the art community of the world and she helped support other female artists and their careers (Chicago. 1980).  She also would point out the fact that there were almost no women artists represented in any art museums throughout the US at the time, in the 70s.

Chicago, born in the summer of 1939 in Chicago, Illinois.  Chicago has remained in the modern art movement for over five decades and she continues to create work, exhibiting across the globe, lectures and continues to create in her studio (Levin. 2007).  Amongst some of her most famous works of art includes projects such as The Birth Project, PowerPlay, The Holocaust Project: From Darkness Into Light, Resolutions: A Stitch In Time, her last work in 2015, Star Cunts and Other Images in London.  Her most famous piece and most largest piece is the infamous collaborative piece known as The Dinner Party.

The Dinner Party is known as a reinterpretation of “The Last Supper”, from the point of view of those who have done the cooking throughout history, is what Judy Chicago said about The Dinner Party in an interview (The Dinner Party. Oct. 3,2012).  This is the piece that Chicago is best known for.  A symbolic history of women was the goal of this piece that took more than 6 years to complete (Chicago. 1979).

To describe The Dinner Party, Chicago forces us to take a walk through history.  The piece is so big, you literally have to walk around it to see the entire piece in detail.  Poetry, written by Chicago, welcomes her audience to the entrance of the large, 48 foot wide sculptural installation (“The Dinner Party”. 2015).  A poem written to reflect upon Chicago’s dream of a world made whole by the introduction of feminine values through art, printed and painted on banners, with visually similar organic lines of wild expressive texture, the text looks as if it was hand painted in cursive font and colors of rusty hues of reds, yellows, and greys, lined the wall welcoming in the audience (Chicago. 1980).  It has an elegant and importance mood in the banners, one of a royal history or reminder of some point in history, possibly preparing the audience for what they were about to view; a step back into history.

The Dinner Party, described by Chicago as a symbolic history of women in Western civilization, intended to represent the struggles of women throughout history, expressed in 39 place settings spread out in three wings, creating a triangle.  The triangle is one of the first symbols of women and of the Goddess (The Dinner Party. 2012).  Each wing has 13 plate settings, each plate setting has its own embroidered runner in which the plates sit upon.  The plates are positioned to tilt slightly upwards, symbolizing the struggles women have faced throughout history.  The needle work used on each place setting is relevant to the time period in which the women being honored lived (Chicago. 1980).

On each place setting there is a hand made chalice and ceramic flatware plus and embroidered napkin (The Dinner Party. Oct. 3,2012).  Each place setting has the exact same chalice and flatware, this is symbolic because no matter how powerful the women being represented was, no matter how incredible, how heroic or extraordinary she was, each women was treated the same way throughout history (Chicago. 1979).  Women have been interrupted, deleted, misrepresented or never represented in positive ways or at all throughout history.

The entire dinner table is 48 feet wide and sits on a triangular floor, this floor is known as the Heritage floor.  The heritage floor is made of 2,300 porcelain tiles and on these tiles there are 999 names of women from history painted upon the tiles (Chicago. 1980).  The women’s names are positioned to reflect the era in time of the honored women from the plate setting.

After Chicago saw several hand painted china-painted plates at an antique shop in Oregon and then after being overwhelmed, while traveling in Italy by the china-painted glass plates she saw there, Chicago wanted to learn how to paint in the china-paint techniques (Chicago. 1979).

Chicago was introduced to a sophisticated artist who was also a china-painter, Miriam Halpern (Chicago. 1979).  Halpern taught Chicago the basics and multiple techniques on china-painting.  Chicago would continue to practice and paint in the china-paint techniques in her studio for years.

Noticing how repeatedly women’s achievements had been consistently left out of history books, oral history as well and records of their lives had disappeared.  Chicago wanted to symbolize and reflect this in a work of art (Chicago. 1979).  She would spend months brainstorming and collecting ideas and resources. She continued to research.  After looking at dinnerware, the idea of setting a place at a table with the plates, silverware, table cloth, and napkins, ultimately lead to the idea of The Dinner Party.  This would be Chicago’s “Last Supper”, only from the perspective of women (Chicago. 1980).  The Dinner Party would reflect both women’s achievements and their oppression.

A dinner party table is confined, it has an edge and things can fall off of it, this is symbolic in Chicago’s piece because women in history have been confined, sometimes to a dinner table.  The Dinner Party is permanently housed on display at the Brooklyn Museum.  The Dinner Party sits on the 4th floor in a dark space where the piece is spot lit giving it dramatic shadows, in a room of its own.  The piece is 48 feet wide made of ceramic, porcelain, textile, and paint (The Dinner Party. Oct. 3,2012).

Wing one begins with the first plate, representing the Primordial Goddess, reminding the viewer that the original view of earth was feminine and divine.  The first God was a Goddess.  The plate is a nascent butterfly form.  All 39 plates in the entire installation have a symbolic butterfly on them.  This first plate had shells representing one of the ancient symbols of the Goddess and of currency and animal skin representing the primitive life style of the time of Goddess worship societies (Chicago. 1979).

Trotula, was one of 13 women represented in wing two.  Trotula’s birthdate is unknown but she died in 1097 in Salerno, Italy.  In Trotula’s dinner table setting she is symbolized as the Tree of Life (Chicago. 1980).  Women throughout history have been seen as the healers, the bone-setters, the birthing coaches, the gatherers of medicine.  Through the middle ages and much of history men have always been away at war and this left much of the responsibility to fall on the women.  Women were pioneers in the medical missionaries, women in convents would try to heal the wounded as well as nurses on the battle fields (Chicago. 1979).

Trotula wrote a book called Diseases of Women, this book was consulted for 700 years after her death and male doctors would try to discredit her vast writings of gynecology, obstetrics and medicine; writing her off as a witch and that even perhaps a man wrote her book, because there is no way a women could ever write about medicine accurately (Chicago. 1979).

Sojourner Truth is one of 13 women represented in wing three.  Born in New York state in 1797 as a slave named Isabella Baumfree.  Truth latter became an abolitionist.  When free she chose her own name.  As an abolitionist and suffragist, Truth was a powerful force in the fight for justice and equality for both African Americans and Women in the US (Chicago. 1980).

Truth’s runner has colors of black, brown, and yellow which is repeated in her plate as well.  The runner is a quilt of pieces that were sewn together which includes bands woven in an African strip-weaving technique.  Reflecting the African-American influence on quilts (Chicago. 1980).

The Dinner Party has remained one of the most historical and feminist art pieces of the 1970s.  Judy Chicago collaborated and brought together over 400 artists who some can say built their career and art techniques out of helping work on this gigantic project (Levin. 2007).  Chicago still remains an ambitious artist continuing to show work across the globe and always questioning, Where is the feminist art? 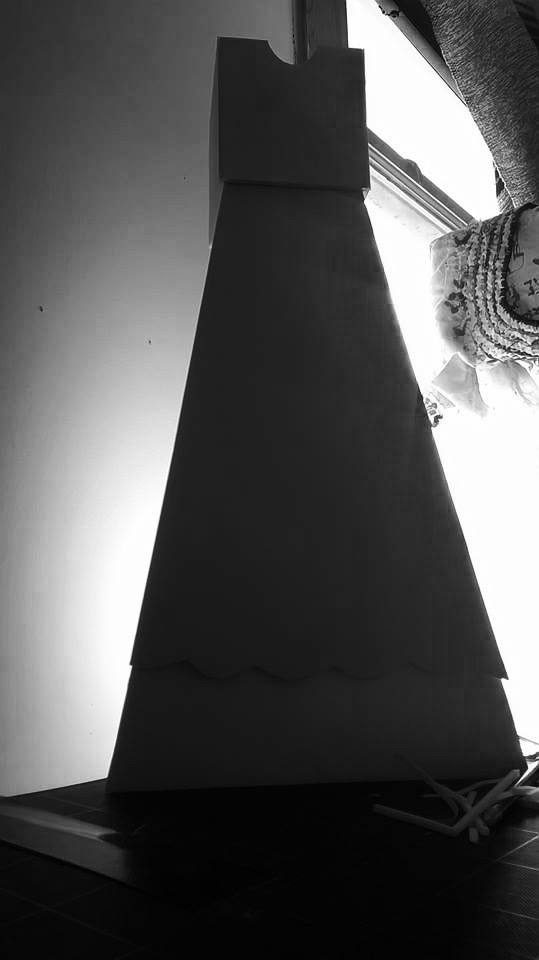 Carving in the Round 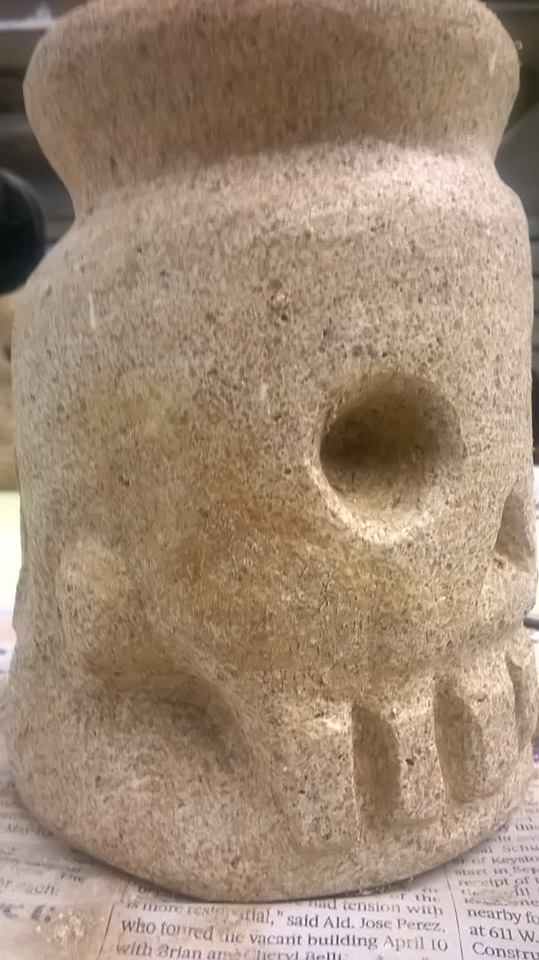 Inspired by my peers, my sisters from Graphic & Illustration class, I had my A-Ha moment seeing their work yesterday,  I was up all night creating. I finally understood how to make an animal with only letters. This might just be the perfect logo for me. Bugs are my Spirit Animals. Bug have saved my sanity, they have given me strength and GREAT power when I felt so scared, alone, sad, small. Centipedes are a Favorite. If you look closely you can see several different symbols for Buddha or a Meditation pose of a figure(s). Bugs have been a place of Peace and Tranquility. #CentipedeSpiritCentipede made with all “I”s “i”‘s Makes sense since “I” feel like a centipede spirit at times.#makemasarte Mirror image of my centipede mades of “I”s. Found my place of PEACE in the center . THIS HAS SO MUCH MEANING TO ME

Indigenous Textiles of the World 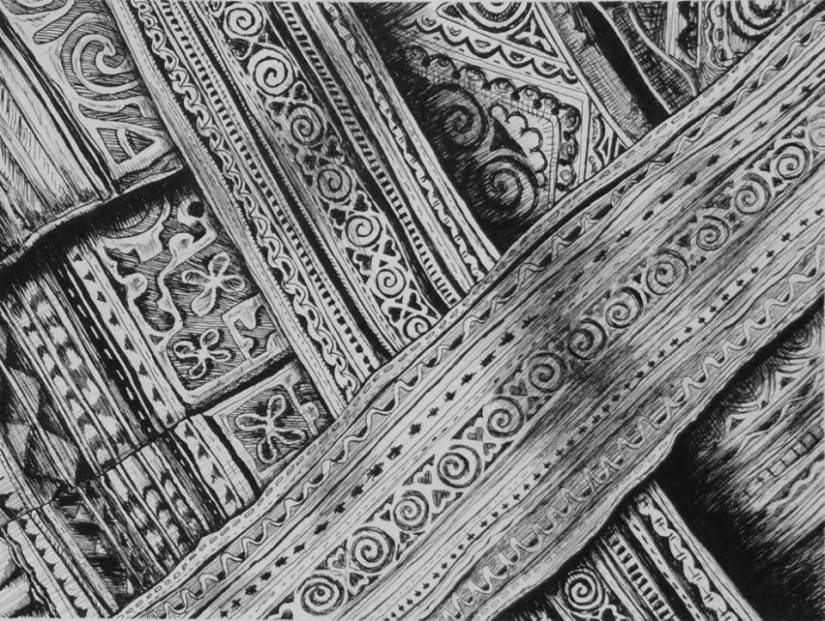 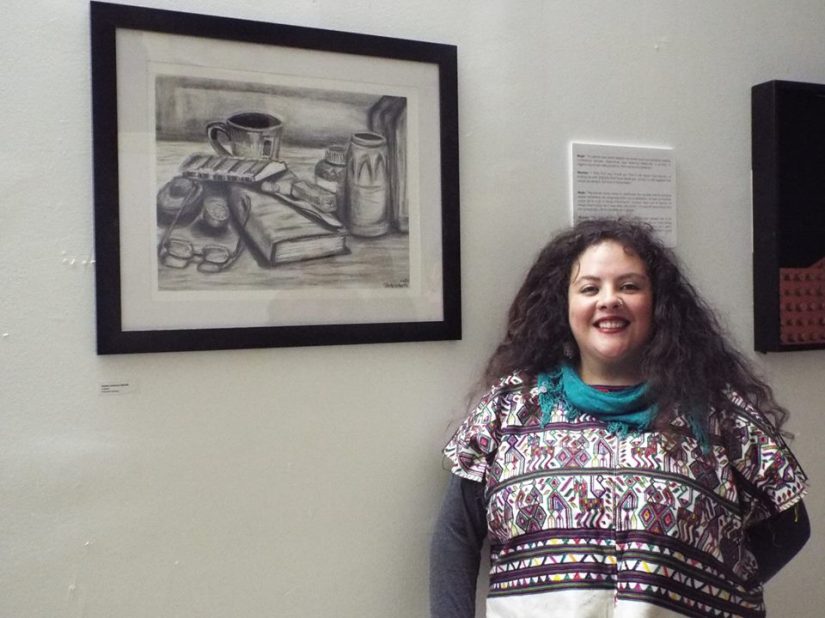 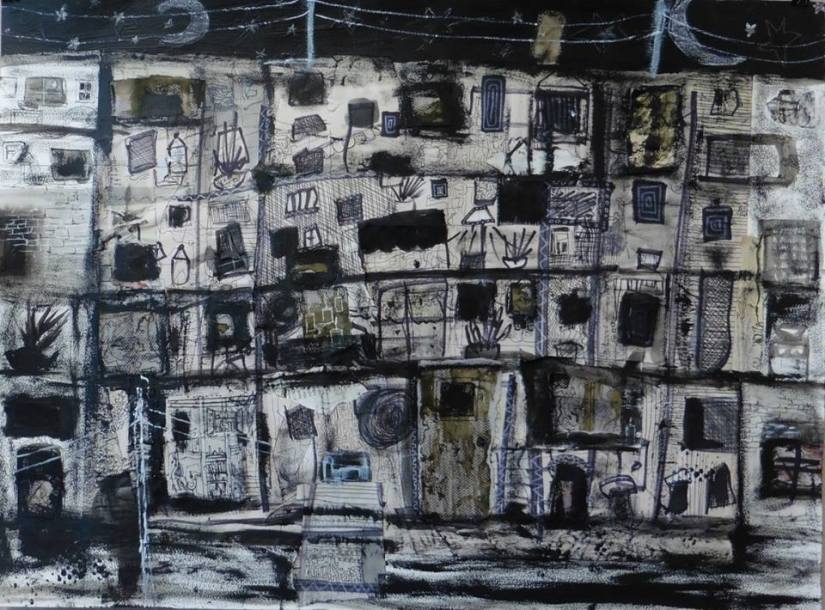 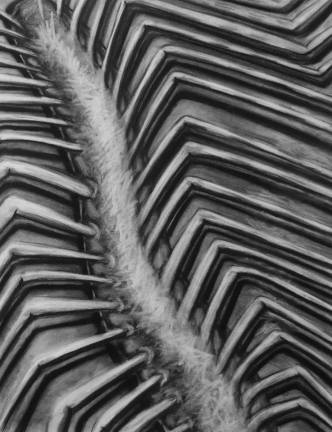 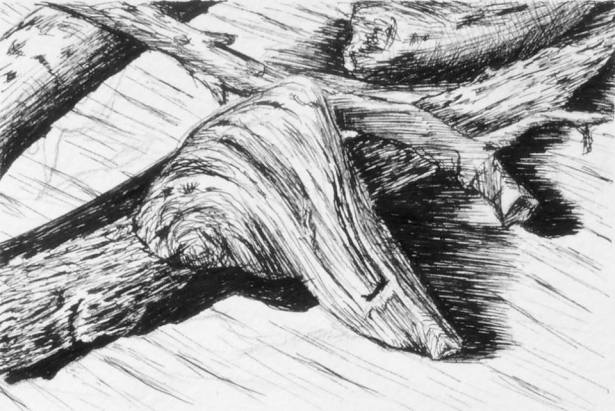 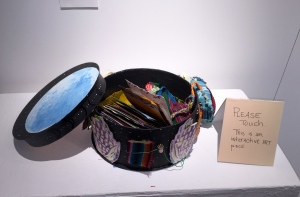 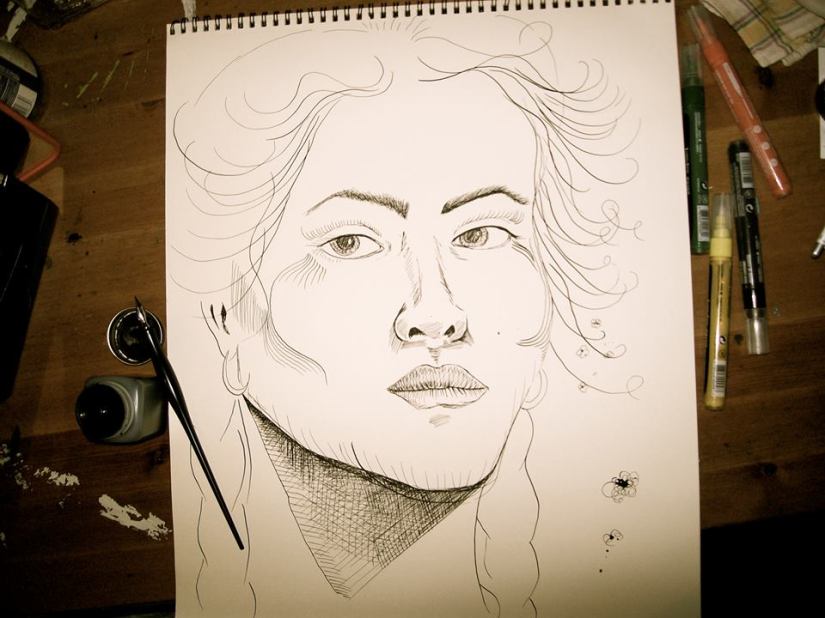 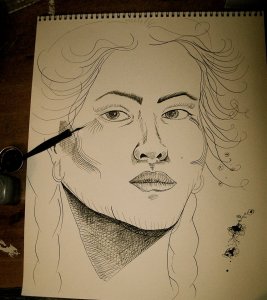 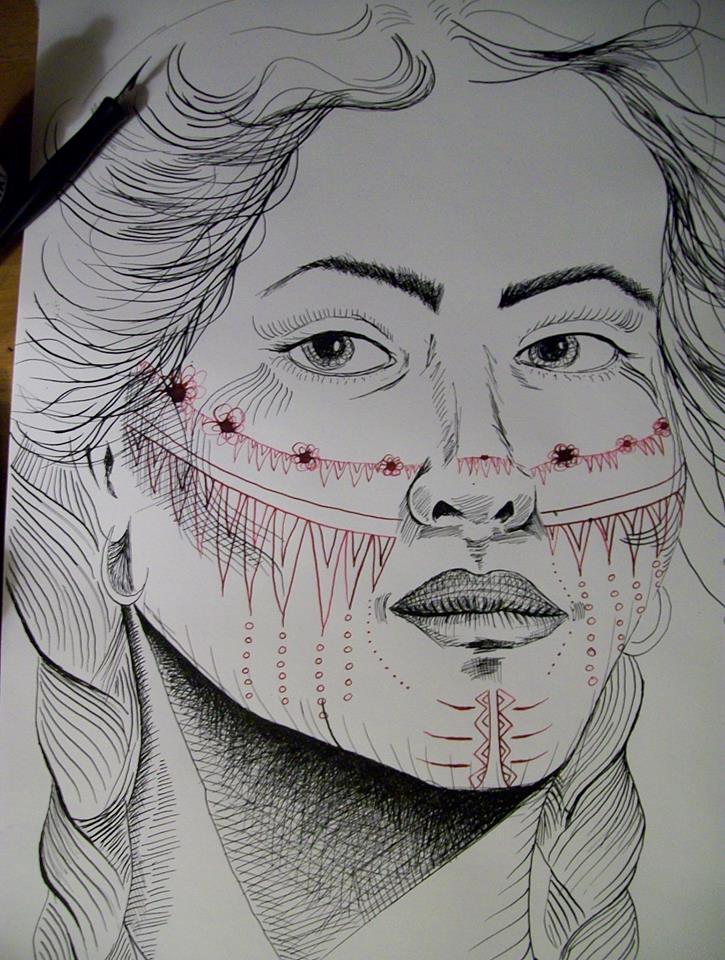 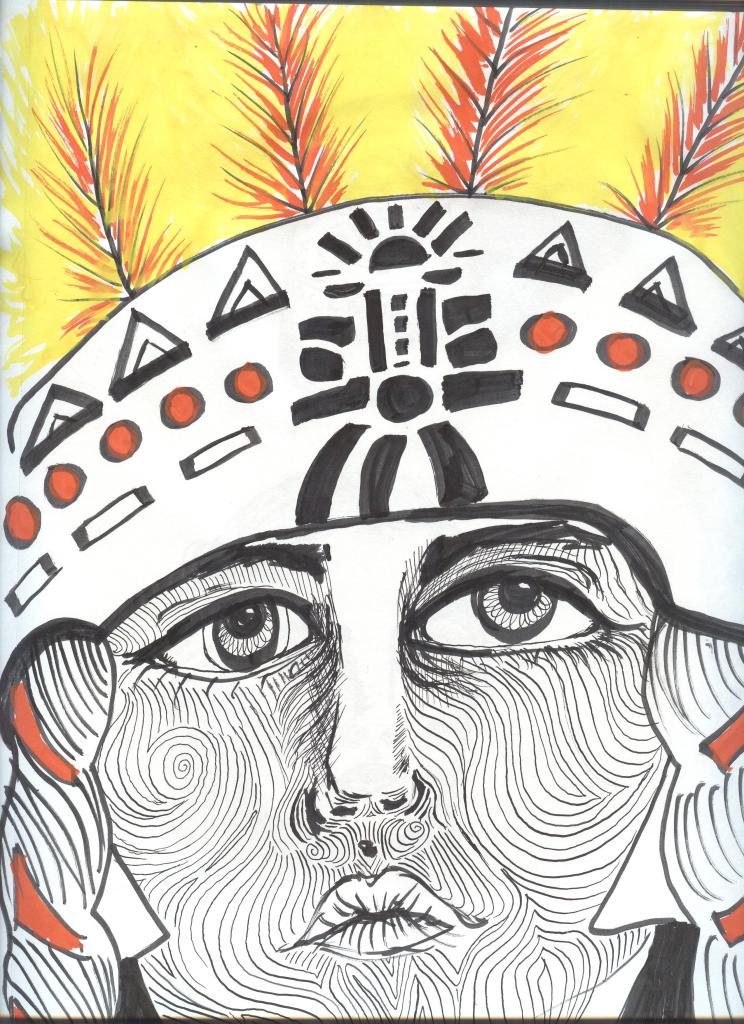 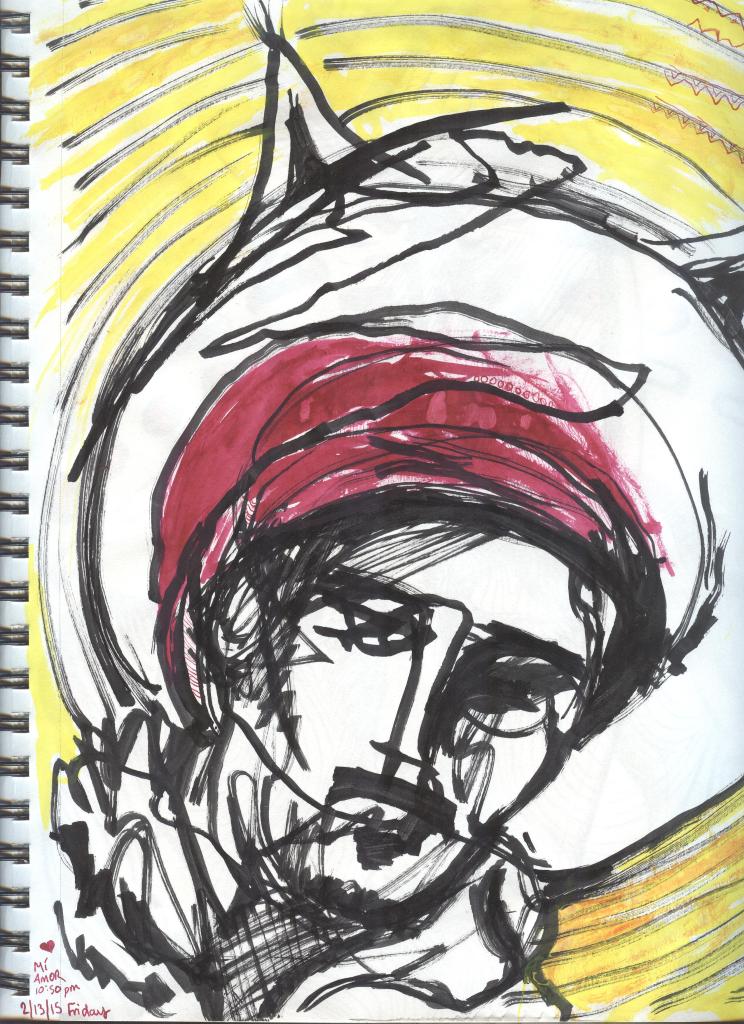 Mondays and Wednesdays at 1:10-3pm

Process: starting with photos I have taken, then turning those into thumbnail drawings in black and white ink. I will then pick 2 images to transfer onto black paper. The cutting will begin after that. 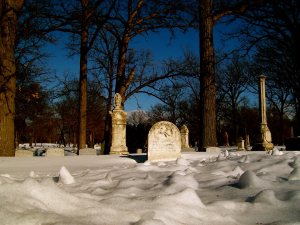 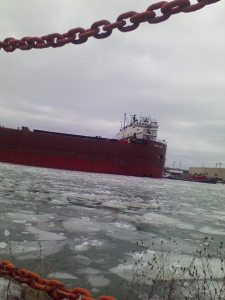 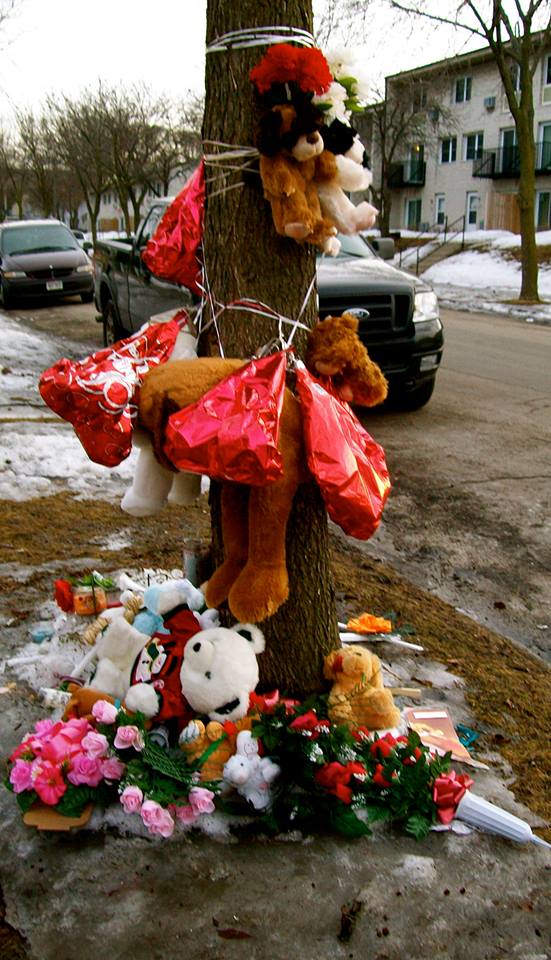 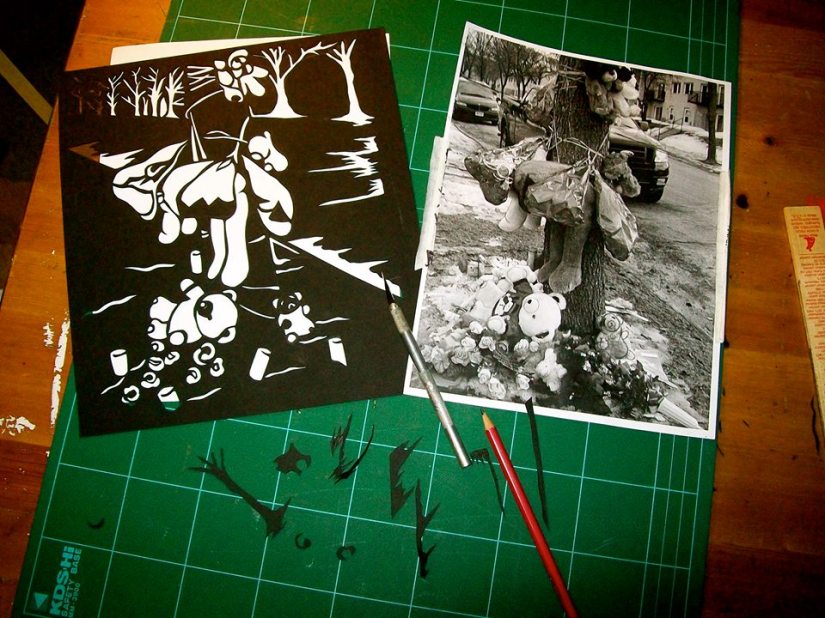 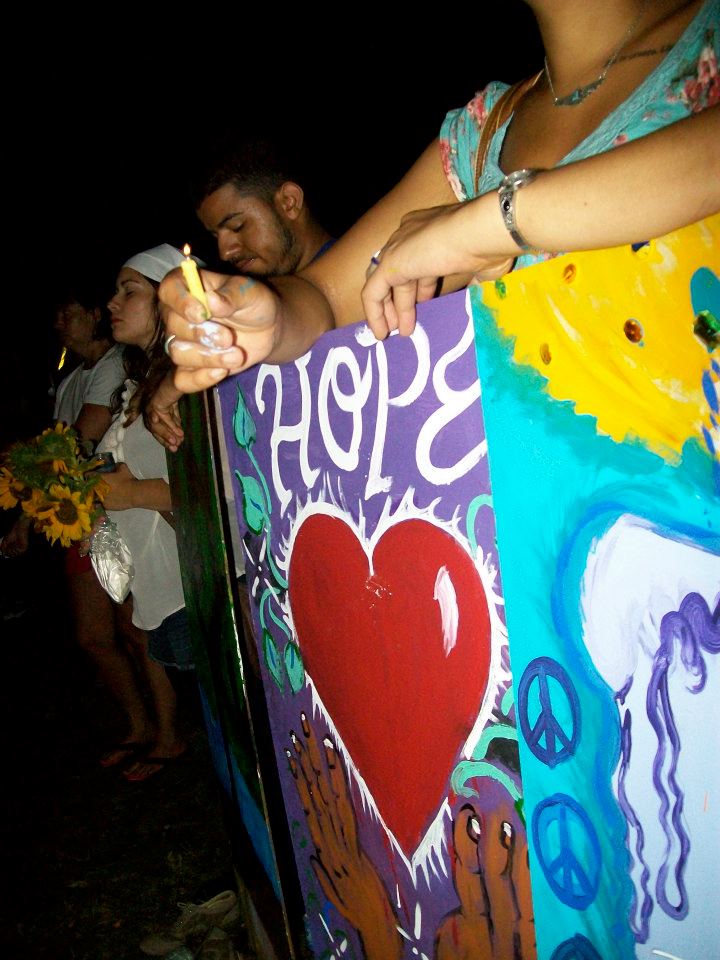 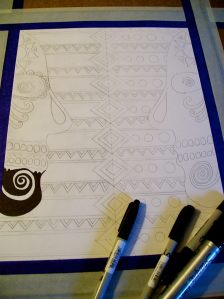 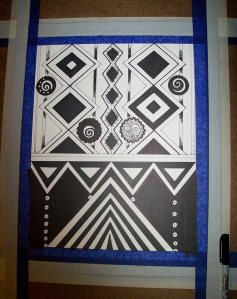 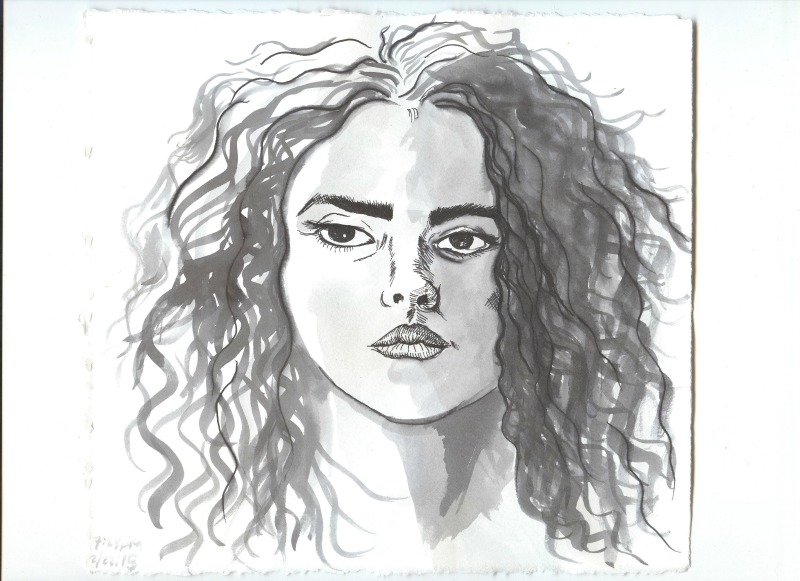 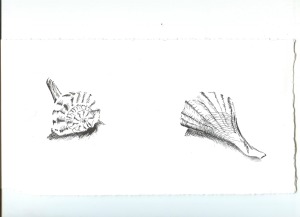 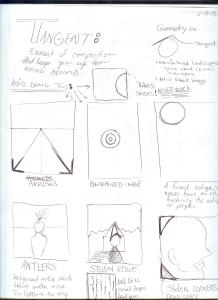 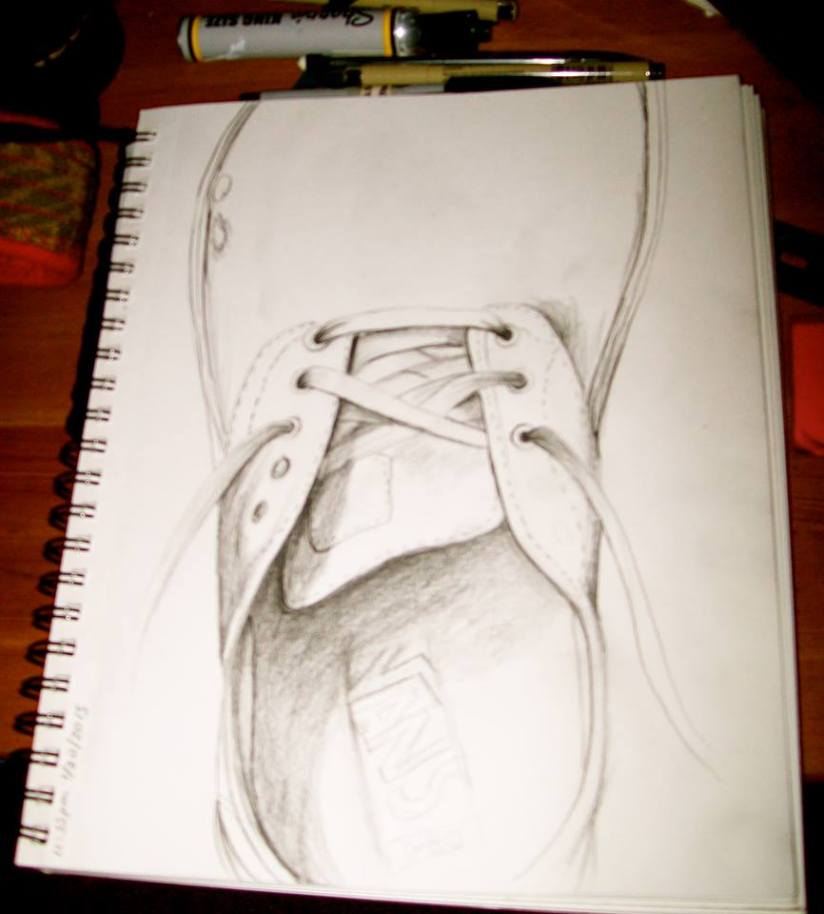